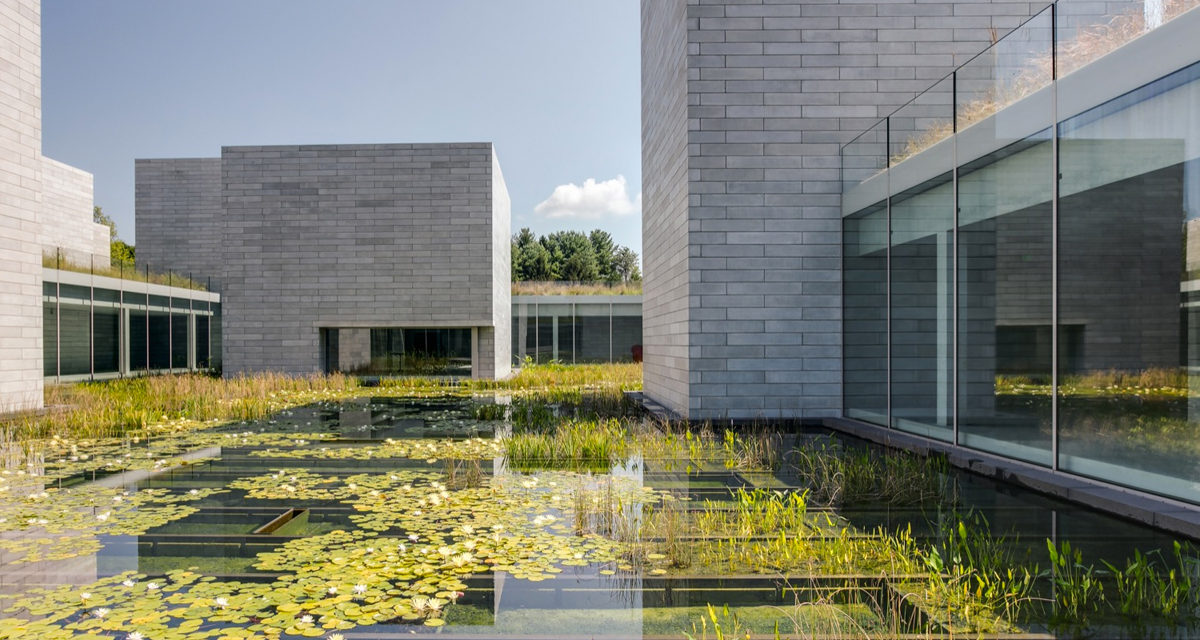 MATTER SO SHAKEN TO ITS CORE
TO LEAD TO A CHANGE IN INHERENT FORM
TO THE EXTENT OF BRINGING IT ABOUT
A CHANGE IN THE DESTINY OF THE MATERIAL
PRIMARY
SECONDARY
TERTIARY
–Lawrence Weiner, 2002.

Photo above of Glenstone Museum by Goran Kosanovic For The Washington Post, https://www.washingtonpost.com

This text, printed in large block letters on a gray wall, greets visitors upon entry to the new building at the Glenstone Museum in Potomac, Maryland. Before I have time to contemplate Weiner’s message, an enthusiastic employee intercedes. Wielding museum maps and an uncanny smile, the young woman is dressed head to toe in a gray jumper that matches the surrounding walls. She rattles off a brief welcome and reassures me, should I have any questions, other employees are scattered around the grounds happy to help. By way of telling me who to look for, she gestures to her uniform, lingering over a thin silver bar affixed above her chest pocket, a sort of name-tag though it notably bears no moniker. She hands me a map and a pencil (gray rather than the typical yellow) and I’m off.

In October 2018 the Glenstone Museum revealed the efforts of a five year expansion, a tremendous undertaking in which no detail was overlooked. Thomas Phifer’s minimalist building boasts 204,000 square feet of gallery space nestled within 230 acres of rolling hills. According to the museum’s website, “Glenstone is a place that seamlessly integrates art, architecture, and landscape into a serene and contemplative environment.”

Contemplate I did. I left the Glenstone filled with questions regarding systems of display and the relationship between art and the structures that house it. I felt conversations with my viewing partner stray more towards the museum’s features than the art it displayed. I wondered, had the museum so seamlessly integrated art, architecture, and landscape to the point of obscurity? Did it matter?

Let’s start at the beginning- the beginning beginning, before I ever made it to Glenstone I had to figure out how to get there. The museum employs an almost ritualistic sign up process.

Via their website, a limited number of tickets are released three months in advance and issued on a first come first serve basis. Currently all dates through October 2019 are accounted for. While entrance is free, and theoretically accessible for all, the admission policy reads as a symbolic hurdle. In effect, Glenstone treads the line between elitist and egalitarian, seemingly not wanting to sit in either category. The museum effectively says, “you are welcome to visit, but we expect a little effort…” I don’t entirely blame them. I’m all for a push towards approachability in the arts but the congested museum galleries, often clogged with uninterested visitors dragged against their will, have gotten out of hand. (This is certainly a subject worthy of its own essay.)

At this point it would be unfair not to mention a clause built into the museum’s admission policy. Any visitor arriving via Montgomery County Ride On, a local bus making daily stops at

Glenstone, is guaranteed admission. The cost to ride is five dollars. The curious loophole provides an outlet for the less organized, or perhaps more spontaneous, amongst us. Though the option is not made explicit on the museum’s website, it appears a number of people have found out about it. On an impromptu trip to Washington DC, I waited for the bus in front of a Domino’s Pizza in Potomac, Maryland. Sure enough, as the bus approached I heard car doors slam and a handful of eager travelers shuffle towards the small Montgomery shuttle. They would soon be told the large cameras slung around their necks were not permitted inside the galleries. There were eight of us, and we rode the bus one mile before pulling into the museum’s perfectly manicured driveway.

Once inside the Glenstone gates the impact of Mitch Rales’s vision is immediate. A gray Ellsworth Kelly totem looms large above a man-made pond. Its shade matches the building’s cast concrete construction so perfectly it appears to have been specifically designed for that exact location. As art and architecture blend together, I ask myself, not for the last time, “What is the appropriate hierarchy at a museum?”

The interior of the building is divided into eleven pavilions, eight of which are dedicated to a single artist. Instead of progressing directly from room to room, the pavilions are organized on cardinal points connected by long ambulatories. Large windows face inward to reveal an 18,000 square foot water court adorned with floating lily pads. The space is lit almost entirely by natural light that passes through the immense windows. There’s not a greasy finger print in sight. Amazed by the nearly invisible pane of glass, it takes me a moment to remember I’ve come to look at art.

If not for the long hallways, moving between the rooms has the potential to feel like navigating a funhouse. Site-specific installations unfold one after the other, including Michael Heizer’s impressive Collapse, a haphazard pile of multi-ton steel beams projecting from a rectangular pit in the floor. Work like these could read as spectacle if you were pushed too quickly from one to the next. Thankfully, Glenstone has built in time to think.

However, at points it feels as though my thinking is on display. In lieu of wall text, the museum has positioned clones of my friendly greeter in each pavilion. I suppose their gray uniform is meant to be inconspicuous, though I can feel one looming over me as I inspect a late career Cy Twombly sculpture. Without the crutch of a wall text presenting what has been deemed the essential information, I am left to look. To contemplate. A glutton for what my mother calls “info-tainment,” I eventually engage the hovering employee. He tells me all five works in the room are by Twombly, with one from each decade spanning 1951 to 1991. Collecting in depth is a pillar of Glenstone’s acquisition model, an effort I appreciate and applaud.

Without lingering on the point to much, I found the galleries dedicated to a mix of artists the most impressive. Beyond simply checking off names that would constitute a formidable modern and contemporary collection, Glenstone seems to have amassed truly great work by all the heavy hitters. Most memorable for me was a particularly impressive Alexander Calder.

Back in front of the Lawrence Weiner I collect my small purse from a bank of code operated lockers. No inconvenient plastic number tag or coat check lines, everything at Glenstone is streamlined. Surprised, I realize I have spent nearly five hours wandering between the pavilions and the outdoor space. I reflect on the entire experience, oscillating between feelings of apprehension and joy. I lament that at times the art, especially in the rooms dedicated to individual artists, feel like accessories for something else, something even beyond the architecture. Art was still the meat in the burger, but it was layered with so many condiments and toppings I lost track of what was important. Lots of museums have faced criticism for potentially overwhelming their art collection with eccentric architecture. The Guggenheim in New York has been accused of this since it moved to its currently Frank Lloyd Wright building in 1959. However, The Glenstone is different. Its minimalist design is intentionally unobtrusive. The place feels like an alternate universe, akin to an art rehabilitation center. Instead of crowded galleries and selfie-sticks, the grounds are filled with manufactured zen. Considering the former is the industry standard, is it surprising the empty halls and strictly enforced cell phone ban feels disconcerting? While it may take a bit of getting used to, I ultimately respect the museum’s efforts. I believe they have built a temple to contemplation, whether or not art stands as the primary catalyst may not be important.