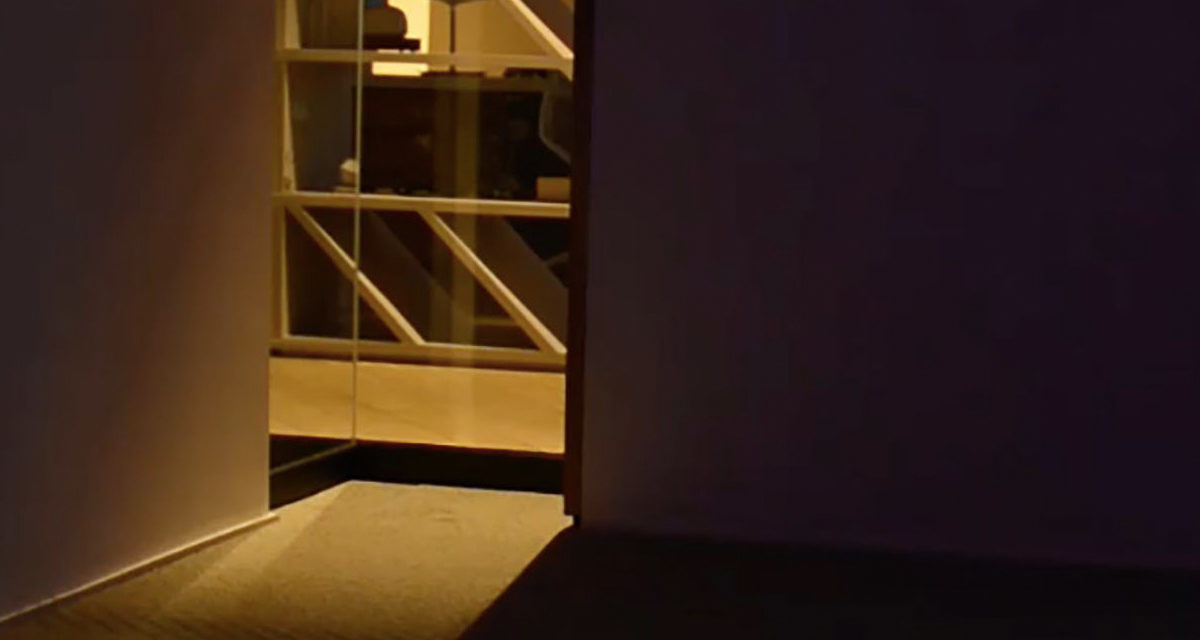 Bridget Moreen Leslie is an Australian artist based in Brooklyn, New York. Leslie creates installations with a focus on collapsing spatial and psychological barriers between class, architecture, noise, location, and repetitious body language.

I wonder why it is daylight that is intended to make us feel safe?
Why evolution made the light a priority?
Which type of light is best— the real or the digital?
Digital light is something that emits from . The third brain; if one is in our head cavity, and one is supposedly in our stomach, then the third one is transitory, but often in our hand.

Fluorescent beams of horizontality mimic my horizontality in this space— I continue moving.
Fluorescence is another type of light. It is blue hued, cool. It tries to replicate the digital. It tries to replicate a type of calmness that one has in the digital. Anonymity, indifference.
We can pretend to care by a swipe or a tap. That flicker of a movement is caring. That synapse of light is caring. Like the light, it is synthetic and therefore safe.

The room here is without color. Shades of gray and white differentiate sections of the walls.
The ceiling is a grid; it is well above your head.
This place is shifting.
Few bursts of bright color from the signs are barely visible even in the mass of gray and light.
For some reason, I consider them without color even though I know it is acutely present.

I try to make my breathing less noticeable because these lacking colors are so close.
Might my breath sounds illuminate
my mortality?

I walk inside a hallway, a room perhaps. It’s hard to tell.

What makes a hallway? What makes a room?
A hallway is a place of transit. It is the temporal state of moving from point A to point B. The nothingness between point A and point B is a hallway. A place that shifts dependent on the subject and the subject’s relationship to point A, and B. We fill the hallways of historical sites with information. Grandiose ways to open the history of the subject and the site. Hallways in settings without history only consider the efficiency that space might provide. One where someone may disinfect their hands as they move.
Erasure.

Consider a place with no hallways; no gaps between site. Is it but a container for the subject?
A room is a space of intent. It is located. We think of it in terms of memory: past, present and future. With the constant push for efficiency in this site, architecture has begun to rely on globalized user experience. This is not as you would expect, through individualization to the modern evolutionary appendage.
Rather, one where spaces of intent are lost to a psychological state of apathy. A PSA, if I may. Our push for a progressive utopia has left human-ness behind to move toward a rigid fixture. So mute, in its depiction of the real that the mind is left to wander toward the social- of the digital- counterpart.
We are given excess, but in the form of the minimal. The Super-Modern.
The minimal allows for narcissism to invade its form. A Super-Modern illness.

We are without questioning, and with that, without place.
This site is that lacking of place.

This place is one marked by constant use, but not of constant tenants. To propose that the social climate of first world urban cities has brought about a PSA, forces me to consider the conditions that are symptomatic of its original causation.

The floor in this space is slippery, but not with moisture; the slick vinyl flooring has been disinfected, so that it gleams with untouched sheen.
This is momentary.
I stride down the hallway, my head lowered.
I wonder if what is said about the millennial generation losing muscle mass in the jaw is true?
My feet mark the gleaming surface of the floor.
Though there is no trace of the previous passerby, who might have walked before me?
Were their eyes, also, looking for the previous passerby, or were they fixated on their digital light appendage?

The reflection in the floor is also cool toned; it matches the monitors lining the hallway.
The difference between the monitors, and the ceiling, and the outside is barely noticeable.
As you move, numbers demarcating space also move— increasing. You only notice this in relation to the one you seek. It’s that PSA again.
Rows of seats fill the spaces under those numbers demarcating space. Some seats face each other and some face away. They are gray too, metal. Bodies fill their seats. Every space is filled, even that empty space.
It’s all quite organized.

Organized excess.
I lower myself into the body of the chair. I fold into a pseudo-relaxed position. My palms slide down the leg of my trousers to stabilize my body as it bends forward. I am planted firmly in the ground through the balls of my feet. The seat fits an average body comfortably but my hip bones dig mildly into its steel frame.
Do other people experience this?
My eyes wander, but only momentarily, until I catch yours. I look down, uncomfortably. This was an invasion. A spatial invasion. I close my eyes and tilt my head back, feigning relaxation but I am too tall to rest my head on the back of the seat. Knowing I must look awkward, my eyes flicker open —this is caring. I glance around again and make eye contact with an other. I lower my eyes again.
What must others think, of the spastic movements from this subject?
I remind myself that these were micro-movements.
Only large in relation to myself. Everyone is fixated on the evolutional appendage in their hand.
No one cares.
I take this moment to scout the interior of this non-hallway/non-room.
Though I am facing another row of seats, with bodies filling their spaces, I am also facing a wall of glass. It reflects the space back at me. It reflects the rows of seats and the disinfected, now trodden floor. I see the grid ceiling, and the rows of fluorescent light above me. I see cords and other mechanisms that power the interior. Perhaps the exterior too. There are metal ventilation systems and pipes of sorts. They blend into the ceiling and the grid well. I follow them for awhile but they eventually disappear within another sub-interiority that I cannot see. I move to the gray and white walls. There are columns, square. Signage and other forms of mapping are present, universal symbols, mostly, and directional forms. The monitors are there too. Little stands with charging stations for our unsustainable appendages are littered about the space. Other doors are markedly placed in the space. All the signifiers are for efficiency.
I hardly notice those others  more permanently in the space, there clothing blends in but is also distinctly more noticeable than the others.
This is not a room or a hallway to them.

I think about EDM in this space. Electronic Dance Music
I think about how a Non-Space is easily reproducible and how EDM is easily reproducible. Its looped beats. Non-Spaces are looped spaces. They are circular, logically.
You move through one and your body has moved through all of them.
A universal language.
It’s conditioned behavior.
I think about EDM because I think about how the people that enjoy EDM move in that space. They go there to have an experience, the only way to enjoy EDM is on drugs.
Then you don’t enjoy EDM, you enjoy the drugs, and you enjoy the mundane loops that allow you to be somewhere else.

It’s like that evolutional appendage.
EDM is a space of transit, mentally.

I spoke with a Harvard business graduate, he is a CEO and works in financial consulting. He works with companies like Wal-Mart. He thinks that progress means that we don’t have to think as much about the spaces we inhabit anymore. Progress means less thinking to him. His subjectivity will never be questioned in an institutional space. In Non-Spaces.

This is taking place for 47 minutes and 48 seconds.
Sound emits above you head. It pulses through your body, your chest.
Most of it you don’t notice.
Our bodies are polluted by vibrational noise constantly. Before we even formed our ear drums, our body was listening.
When we were just a single cell our body was listening—feeling.  What were the vibrations of space like then?

Another sound begins emitting from the floor this time.
It is jarring and non-linear—tonally familiar,
yet,
unfamiliar.

During its duration, the noise uses polyphony, and the EQ is raised and lowered.
The vibrations are all lo-fi, unrecognizable.
You haven’t heard them in this way before, but some part of you knows them, in a sense, you know their construct.
It’s as though the space itself finally gained a voice, and you were on the same frequency for the first time.
There are beeps, electrical currents. Perhaps from the pipes which disappeared into the sub-interior space. Maybe they are finally telling me where they went.
There is much static in the space.
Perhaps the sounds of molecules speaking. Asking the same questions I ask. Asking about the politics of this space; asking about their identity in this space.
This sound is hygienic, It feels like the unmarked floor.
It perpetuates secretly and we all consume it with unawareness.