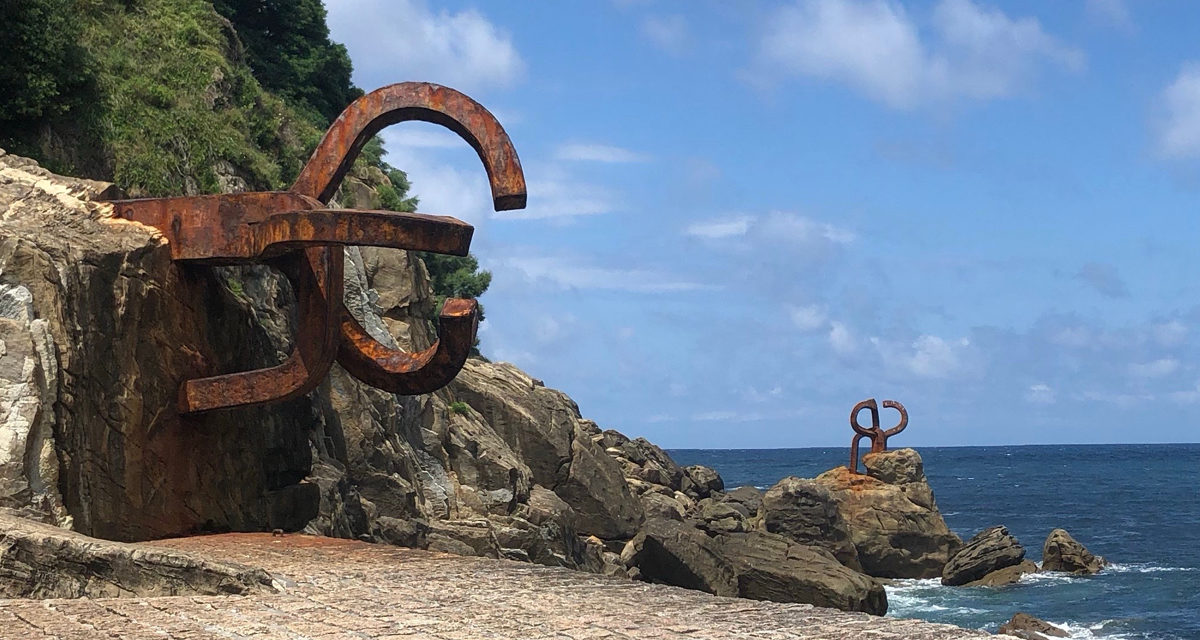 …it has decayed to mean nothing more than “very big.” American cities are now generously speckled with abstract ironmongery: sculpture that means nothing but is part of the perfunctory etiquette of urban development, most of it larger than it needs to be… – Robert Hughes, 1983

I punch the word “monumental” into artnet’s online search engine and sift through 3,600 results. As I click through images —everything from dining room tables to Jeff Koons’ ubiquitous balloon dogs—it appears the term is used to describe any object of large dimensions.

Despite artnet’s flippant use of the word, I do not believe physical stature alone determines monumentality. My remark is not meant to attack artnet as the sole perpetrator of this particular falsehood. The word has been over-used by critics, curators and dealers alike. It has devolved into a hackneyed crutch, feebly supporting exhibition titles and critic reviews, hindering our ability to think judiciously about what it is we are actually seeing. In an effort to resurrect the term, I have attempted to define monumentality through the most objective means possible. These include analyzing a sculpture’s structural quality, primacy of scale and permanence.

The relationship between sculpture and architecture is essential to understanding a sculpture’s structural quality.[i] By this I mean sculpture which carries an architectural presence. Consider Mark di Suvero’s Joie de Vivre, located in Manhattan’s Financial District. Situated amongst some of the city’s tallest buildings, the sculpture exists as an independent structure, one whose interior space can be entered and experienced from the inside. The space within the sculpture’s steel tripodal legs appears chamber-like and inhabitable. This void is not used to accentuate the existing physical form, but rather, to create for us an entirely new one. The intersecting beams embrace an architectural approach to composition, one that utilizes proportion and balance to give negative space a structural quality. As such, di Suvero’s sculpture establishes an architectural presence while simultaneously serving as an autonomous work of art.

This example is not meant to assert that monumental sculpture must always be of a size we can physically occupy. Though monumental work that is large may be easier to recognize, size alone does not determine its monumentality or structural quality. Take for example a series of sculptures by Lygia Pape titled Ttélia 1C. The workconsists of nine bronze and string structures each measuring roughly 49 x 25 x 20 centimeters. Like Joie de Vivre, we witness the formation of protected spaces, voids that begin to outweigh the tangible material. Thin gold-plated copper rods connect to form rectangular chambers of space that are walled by tightly placed lines of gold string. The viewer’s attention moves between the physical material and the negative space framed by the copper rods and taut string. Like di Suvero’s work, the crafted voids have a perceptible physical quality. It is in these voids that the essence of the work’s monumentality is found. While we cannot physically enter Pape’s work, we access these spaces with our minds, entering and exiting the work’s perimeter the same way we do with Joie de Vivre.

Though di Suvero and Pape create architectural components through domed or framed areas of negative space, this is not the only means to granting a sculpture structural quality. Steve Buduo’s steel sculpture, La Reforma, measures a mere 6.3 centimeters tall but stands with a commanding magnitude greater than the sum of its material parts. The erect totem is pierced by a series of horizontal cuts. These incisions interrupt our focus of the material object, revealing narrow bands of space in front of and behind the sculpture. Three shallow vertical incisions compliment the horizontal bands. Like the horizontal cuts, these shallow incisions grant space constructive agency, directing our consideration of the object between its material presence and its interaction with the area in which it stands.

The work’s quality of structure lies in its ability to move beyond its tangible elements. Buduo continues to raise our awareness of the area around the sculpture, and our own existence within that space, through his delicate use of shifting planes. Instead of a traditional four walled pillar, we are presented with surfaces that diverge, widen, narrow, and overlap. The shifting walls interact with the surrounding light, increasing the sculpture’s command of immaterial elements. The incongruities encourage a three-hundred and sixty-degree assessment of the work and encircling the pocket-sized sculpture is akin to discovering each façade of a building. The potential to interact with Buduo’s work from multiple angles increases our ability to experience the work’s scale and weight in relation to our own.  It is an interactive relationship between viewer and object built on consideration of the space both occupy.

Like Pape’s work, it is easy to imagine Buduo’s totem larger than it is. At just over six centimeters, La Reforma achieves a monumentality beyond its physical size through its masterful use of scale. Henry Moore once described the precious balance achieved when an artist strikes perfect proportion:

You see, there is a difference between scale and size. A small sculpture only three or four inches big can have about it a monumental scale, so that if you photographed it against a blank wall in which you had nothing to refer it to but itself…a small thing only a few inches big might seem, if it has a monumental scale, to be any size. [ii]

In these instances, proportion reaches beyond the physical confines of the structure to the concept of the viewer and where she exists between earth and sky.

In 2018, Christie’s heaped praise on Jeff Koons’ Play-Doh, describing it as a monolithic, monumental work in which the “momentary has been immortalized”.[iii] Though Christie’s hyperbolic language is unsurprising (the work was included in its Post-War and Contemporary Art Evening Sale of the same year), it is yet another example of the superficial use of the word “monumental”. While the work measures an impressive 3.87 meters, the aluminum mass lacks a nuanced harmonic relationship with its surroundings. Like many of Koons’ large-scale sculptures, we are presented with an item we typically experience as small—most often porcelain figurines—and asked to reimagine it as big. Play-Doh certainly feels big, as if Koons managed to right click a small mound of actual playdough and drag its corners into exaggerated dimensions. Exaggerated is the key word here. Koons’ work feels inflated and without a clear sense of value for the particular decision to enlarge it. When we say an object feels “big”, we are describing our feeling of physical smallness in relation to it. Though this may be the artist’s intention, the lack of scale alters the viewer’s orientation in a way that does not feel correct or fulfilling. Instead, we are preoccupied by the sculpture’s dimensions. We gawk at its incredible size, failing to consider how it relates to the world at large.

A sculpture with permanence captivates us after any sense of size wears off. It has a resilience that extends beyond both its immediate location and time. When I speak of permanency in terms of monumentality, I am referring to both its physical and metaphysical capacities. When a sculpture is constructed of a durable material, it establishes itself as an enduring presence. In these instances, we are forced to reconcile with the probable truth that the artwork will outlast our mortal existence. In the truly profound cases, we recognize that it already has. We experience this phenomenon in the presence of ancient constructions like the pyramids at Giza and the Moai heads on Easter Island. In a way, the works’ physical realities elevate our spiritual understanding. Works like these activate a sense of scale that reaches beyond the physical into the temporal. We are forced to reconcile with the vastness of human history and our own minute existence within it.

This is the reason ephemeral works, like Kara Walker’s A Subtlety or Christo and Jeanne-Claude’s Wrapped Trees, though ambitious in size, stop short of monumentality. While their propensity for change adds a layer of vitality, it also detracts from the possibility of perceived infiniteness. Whether we can confirm their date of consecration or not, they are unmistakably of this moment, their temporality exposed by the delicacy of their materials.

However, this sense of timelessness does not belong solely to work of the ancient world. In 1977 Eduardo Chillida installed three steel sculptures along the rock outcroppings of the Cantabrian Sea in San Sebastian that unambiguously transcend time and context. Collectively titled The Comb of the Wind, each sculpture is comprised of four steel beams, one anchored directly into the rock face, the other three reaching outwards, across the sea and towards each other. Despite the significant distance between them, the three forms are in direct dialogue, each one gripping the air as it passes between them, giving palpable form to an immaterial element. The vitality of the ocean and its interaction with the work heightens the sculptures’ sense of durability and monumentality. Overtime, the steel surfaces have developed a rich patina from exposure to the saltwater, camouflaging their twentieth-century birth and lending them a sense of timelessness.[iv] The result is a testament to the capacity of man and his powerful union with nature.

The Wind Combs exude a similar infinitude as the pyramids at Giza and the Maoi heads on Easter Island. While the ancient works’ contemporary receptions allude us, they contain a spiritual permanency that has sustained the test of time. Hans Hoffman acknowledged art’s eternal capacity when he said,

In the passage of time, the outward message of a work may lose its initial meaning; the communicative power of its emotive and vital substance, however, will stay alive as long as the work is in existence. The life-giving zeal in a work of art is deeply imbedded in its qualitative substance…the Real in art never dies, because its nature is predominantly spiritual. [v]

As Hoffman described, monumentality is a quality that relates not to size, but to spiritual radiance. Like di Suvero, Pape and Buduo, Chillida achieved this spiritual radiance through an innate appreciation of the relationship between interior and exterior. His is a work that has as much to do with space as solid material. It is within this space, and on the scale Chillida has crafted it, we experience a structural quality in which the sacred can reside. Together, with the work’s enduring presence, we discover monumentality.

Conclusion Taken together, these elements—structural quality, primacy of scale and permanency—are tools for recognizing the monumental in art. As we navigate a world saturated by large-scale sculpture, our ability to discern the difference between big and monumental becomes imperative. When we describe work like Jeff Koons’ as monumental, we strip the word of its power. By substituting mediocre work of an imposing size for truly monumental sculpture, we sacrifice the word’s meaning at our expense. If we limit our use of the word to describe works that possess the aforementioned traits, when we encounter the monumental, we will be better equipped to experience its profound effects.[vi]

[i] Though the aforementioned traits can be readily associated with architecture, commemorative monuments, memorials and buildings are outside the scope of this study.

[iv] The online sculpture Atlas of San Sebastián notes Chillida’s use of a special steel which remains largely unaltered by water and salt, the oxidized layer itself acting as a protective agent against the elements. It has been calculated that the steel will lose approximately a centimeter of substance every hundred years. See “Comb of the Wind”, Sculpture Atlas of San Sebastian. www.santelmomuseoa.eus

[vi] To end, I would like to note that I do not believe monumental to be a synonym for excellent. Monumentality is its own category. It exists at the fusion of form and spirit. There are many sculptures I believe to be successful in every way that I do not count as monumental.