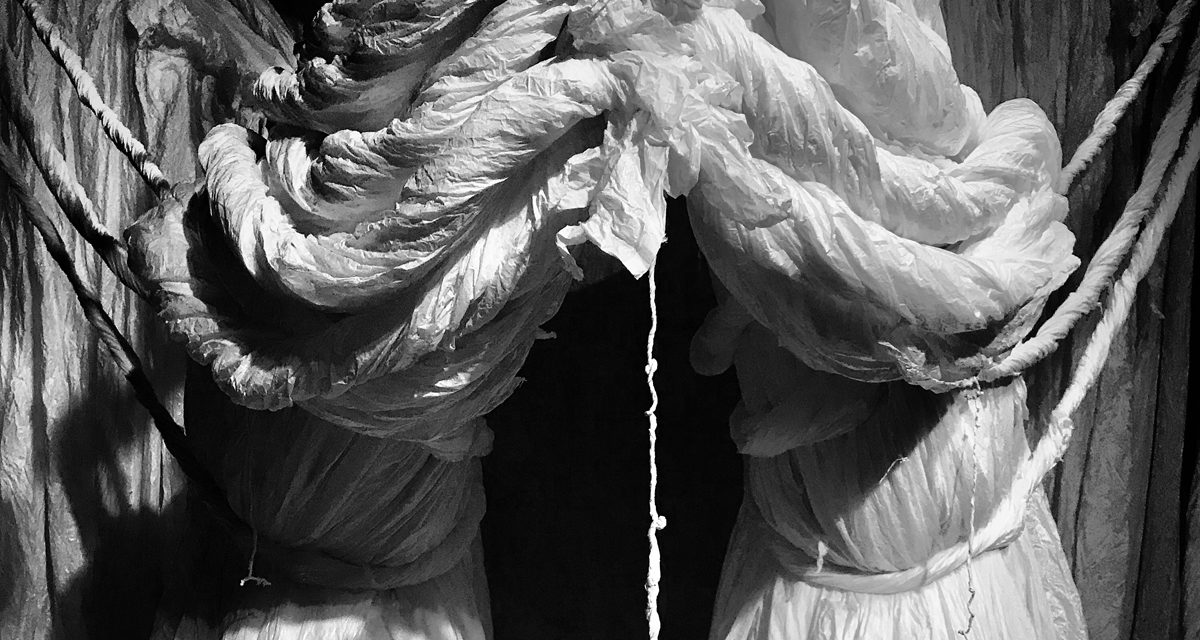 Chastity Pascoe is an artist living and working in Miami, FL. Pascoe graduated with her BFA in Studio Art from Florida Atlantic University in 2017.

Estuary’s curatorial debut Radio Silence discusses the malleability of identity. Tayina Deravile and Allison Bolah (the organization’s founders) alongside the 12 artists featured, escort viewers through a conversation about the constant reshaping of self. This evolution takes place as a result of culture, environment, and the experience of living in an oppressive society. The works in the exhibition range from meditative to urgent, creating a sobering tension throughout the 8,000 sq. ft. warehouse space.

In Kandy G. Lopez’s collages Piece I and Piece II, a single figure silhouetted in white stands in an industrial cityscape. The figures almost blend into their surroundings because they are rendered so flatly, but their passive gestures suggest they lack the same harsh qualities of the city. They are both of this place and other than. The precarious relationship between individual and environment is also present in Holding by Terrance Price II. A black and white portrait style photograph shows the sitter holding a framed, folded American Flag presumably for a veteran or fallen soldier.  However, only their mid-section is visible calling to question the extent that the imperialism of the United States can eclipse one’s personhood. In contrast, Price’s digital video Take Your Timepieces together the individual through an album-like presentation of old photographs.

Nearby hangs Khaulah Naima Nuruddin’s Foundation where thousands of violently scratched and drawn hatch marks represent the routine of work. At four times her height, the highly gestural drawing is suggestive of both the artist’s hand and body. The piece sags from the exposed ceiling as a testament to the wear and tear that is endured by Black women pushing against a society that is expressly violent toward them. The play between the title and the material the marks are made on (roofing felt) suggests that what is above and what is below are inextricably linked sites of work rather than opposing ones.

Keisha Rae Witherspoon carries on this blurring of the binary in 1968>2018<2068. In the video scenes from popular culture and historical unrest are seamlessly woven together with Afro futuristic text dispersed throughout. The inevitability of riot and warfare caused by colonialism is laid to bear before coyly being faded out by the sound and visual of Aretha Franklin “say[ing] a little prayer for you” throughout the ages. With this work Witherspoon suggests that such similar violence of past and present will take place in the future if the problem of imperialism is not addressed.  Each artist in the exhibition is calling toward the body’s ability to hold and expel its experiences of everything from vulnerability to trauma. In a time when mass shootings at the hands of white supremacy in the U.S. have become commonplace (Malka 2019), Radio Silence is alerting us that our bodies are present to every event. Whether joyous or sinister, we’re constantly changing as a result.